Since the 2013-2014 school year, SMBC has sent one volunteer Tutor and one volunteer Classroom Helper to each classroom teacher at SME for the entire school year. In addition to the Tutors and Classroom Helpers who serve faithfully, a team of Substitute volunteers is on-call to fill-in for the regular volunteers on the rare occasions when they must be absent. All volunteers wear a distinctive black “smock” with the SMBC logo embroidered on the front and a name tag to provide identification to all those with whom they make contact. During the 2017-18 school year, several SMBC volunteers were caught in action: Stephanie Garrard leaves the school after spending time in the Kindergarten classroom of Rebecca Seebold. Susan Boyer and Jackie Powell each tutor a child in the SME library. Bruce Quick, spends an additional day at the school to help Counselor Heather Beard with vision screening in the gym, after having spent two hours on the previous day serving as both a Tutor and Classroom Helper in the 4th Grade classroom of Neha Patel. Robin Gray grades papers in the 2nd Grade classroom of Barbara Baar. Vickie Gentner tutors a student with flash cards outside the Kindergarten classroom of Caroline Pass. Ruby Miller helps a student, from the Kindergarten class of Amy Tucker, to post his work on the hallway bulletin board. Classroom Helper, Greta Taylor, and Tutor, Ruth Shelton, sign-in at the school office before reporting to the 2nd Grade classroom of Deborah Toussaint, where they are greeted happily by Deborah and two of her students who are eager to read their books to Ruth.

During the month of July 2017, the SMBC congregation purchased and collected school supplies for 4th & 5th grade students whose parents were unable to provide them. Here you can see SMBC members, Helen Hamilton and Ruth Shelton as they select items from the official SME Supply List to purchase and deliver to the little yellow school bus. Supplies collected will be delivered to SME in time for them to be distributed to appropriate students prior to the beginning of the school year. SMBC will deliver another inventory of school supplies at the start of the second semester in January 2018. 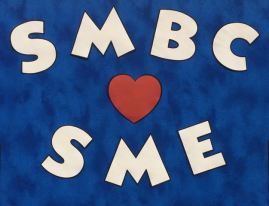 On July 25, SMBC members spread new mulch and did general landscaping work to the courtyard and around the school marquee at St. Matthews Elementary School. Pictured here are Brian Johnson (Minister to Youth), Luke Payne, Carter David, Kelli Payne, Kelly Barnes, Bill Nowak, Morgan David, Tim Williams, Tommy Willard, Ron Broadwater, and Stanford Broadwater. This is the 5th year that SMBC has provided this service as part of its School Ministry at SME. 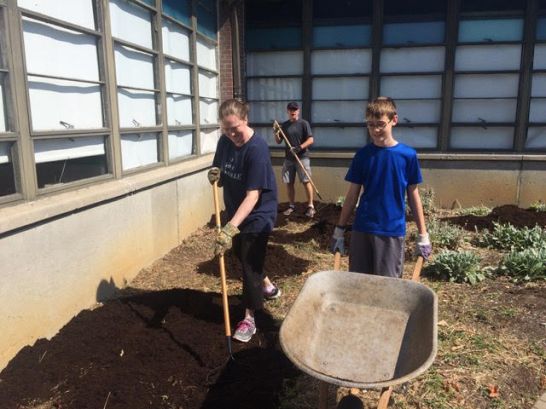 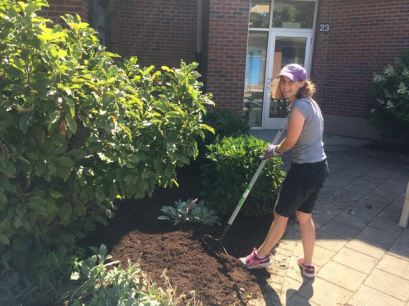 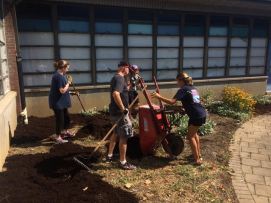 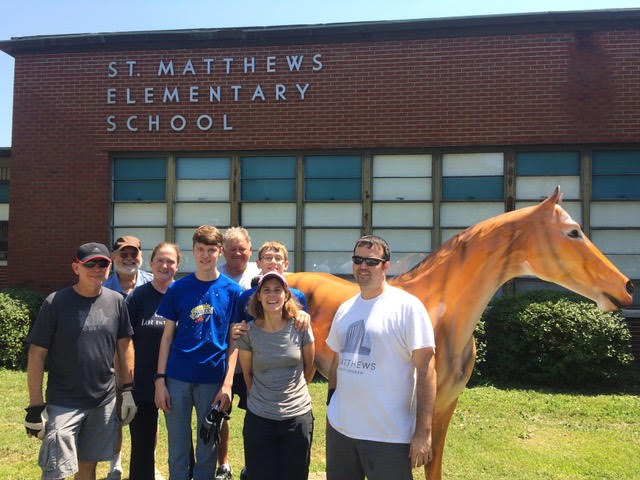 When SMBC initiated their ministry at SME in the fall of 2012, teachers were provided a complimentary case of copy paper to start the school year. In January 2013 teachers were provided a new supply of copy paper during a faculty meeting in the library. Each gift was accompanied by a note with a scripture verse from Deuteronomy 32:2 (ESV): “May my teaching drop as the rain, my speech distill as the dew, like gentle rain upon the tender grass, and like showers upon the herb.”

Beginning in the fall of the 2015-16 school year, SMBC has provided box lunches to the SME teaching staff for the Parent-Teacher Conference Day held at the school in October and again in February. The SMBC Food Ministry team, plans, prepares, and delivers 50 box lunches to teachers for each Conference Day. Here the box lunches are assembled by the team, consisting of Team Leader, Bobbie Whitten, with the help of Sara Brinley, Carla McCormick and Tommy Willard. Lunches and a cooler of cold drinks are placed in the SME Teacher’s Lounge for them to eat as their conference schedule for the day allows. 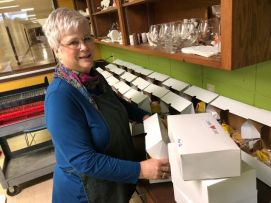 Since the 2015-16 school year, the 4th Year of the School Ministry at SME, SMBC volunteers have invited SME staff to attend the Annual SMBC Christmas Dinner. Following are some scenes from the event in December 2017. 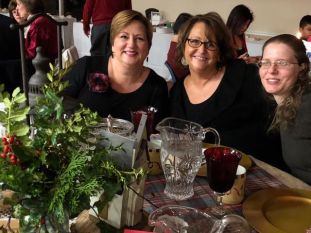 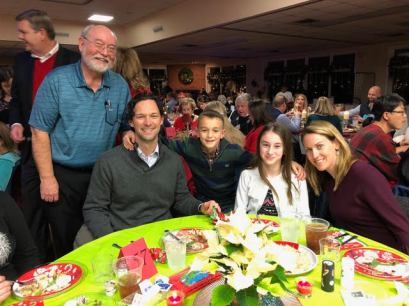 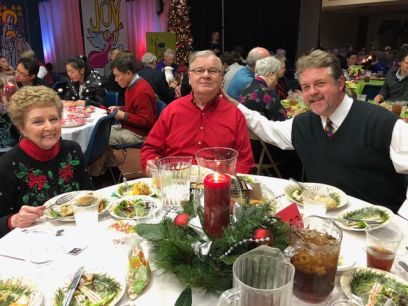 The Grandviewers, the retired and senior adults at SMBC hold an event each month that usually includes lunch at the church, followed by an informative and entertaining program.
For the April 2018 program, about 25 members of the Grandviewers group, along with SMBC Senior Pastor, Greg Barr, Minister to Children, David Garrard, and Minister of Worship Arts, Tim Galyon, attended the dress rehearsal of a musical at SME, after enjoying a delicious lunch together at Kayrouz Cafe on Willis Avenue near the school. The concert was performed by students in Derek Siebert’s music class, which consisted of Rebecca Seebold’s Kindergarten students. The students were poised, talented, and prepared, looking more like polished performers who had years of experience in the spotlight on stage! 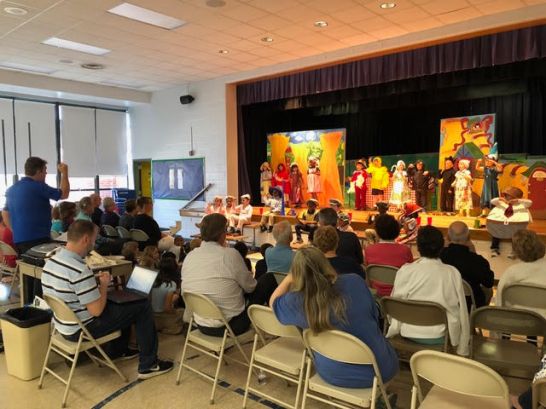 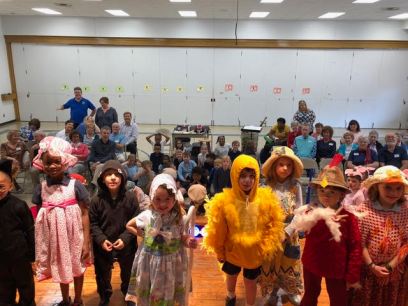 On May 8, 2018, David Garrard, Minister to Children at SMBC and a professional magician who has performed all over the country, including on the Penn & Tiller Magic Show in Las Vegas, volunteered his services as the featured speaker at the SME assembly to motivate 3rd, 4th, & 5th grade students to perform their best on the annual Kentucky state achievement test, K-PREP to be administered the following week. To illustrate his message of the importance of hard work, preparation, determination and never giving up as they apply to test taking, David attempted to perform Harry Houdini’s famous and difficult escape from a straitjacket! With the assistance of Assistant Principal, Jeremy Johnson, and Principal, Scottie Collier, who ensured the security of all the clasps, buckles, and locks, David donned the straitjacket, which he promised to remove in just 3 minutes! As the seconds ticked off the countdown clock on stage and with the students in the SME gym cheering encouragement, David struggled to escape from the seemingly inescapable confines of the jacket. Then, as the clock approached 10 seconds and it seemed he would fail, David was able to remove the jacket, toss in the air to land on the stage floor with 2 seconds to spare, demonstrating to all students present that it is important in life, and on tests, to be prepared and to NEVER GIVE UP!

SMBC member Bill Nowak serves as a Cross-Country Coach at SME. Although he has grown children of his own, as well as grandchildren, he does not have a child attending SME. He serves because he loves running, he loves children, he loves to have fun, and he wants to demonstrate God’s love to the students and adults at SME! Here Bill can be seen with the SME Cross-Country Team.